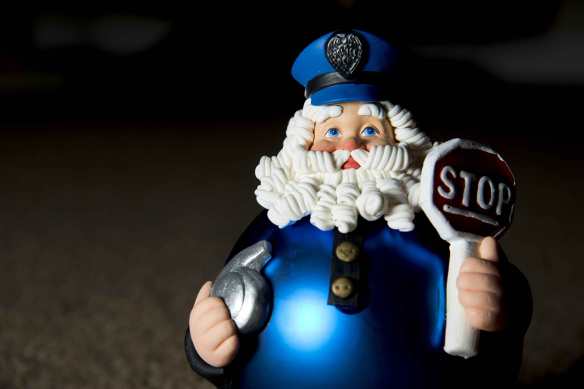 The other night it was raining cats and dogs when I was dispatched to a non-injury collision where both drivers pulled into a parking lot. When we arrived, the first priority was finding somewhere to be dry at.

I exited my car and took shelter under the overhang of a business. One of the involved drivers got out of his car in a huff and walked toward us as he sarcastically said, “I guess I’ll go over there.”

The other driver got out of his car and walked over to where we were. He was calm, polite and looked like Santa Claus, except his white beard was on the short side. Santa stood by while I spoke to the knucklehead first.

“I already called my lawyer,” said the loud and obnoxious guy as he tried to sound like a big shot. Part of me wanted to ask him if his lawyer was going to handle the report also.

He then started to tell me what happened in his bully voice. During the story he pointed to Santa and called him a “faggot.” WTF? Where did this guy come from? His ignorance flowed from his mouth like a volcano spewing lava down the mountain toward the village.

At this point, my body worn camera was the only thing paying attention to him. I had mentally checked out as soon as he grunted and pounded his chest like a caveman.

I finally cut him off as I said, “You’re not helping here.”

The Santa hater snapped out of it and said, “I have anger issues.”

When I was done I went over to Santa and listened to him tell his side of the story. Santa clearly didn’t have any anger issues. He was more of a jolly old guy. The only thing missing was a sleigh and Rudolph.

2 thoughts on “A Christmas time knucklehead”