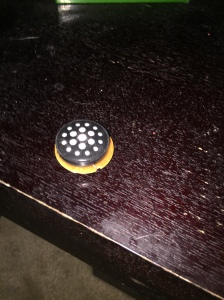 Have you ever heard voices in the dark? Well, let me tell you a story…..

One night, I was parked behind a building while I was doing paper work in my police car. The night was quiet and there was no one around. The only noise was from my idling engine, the air conditioner and the occasional radio traffic from the dispatcher. I was backed into my spot and I had a clear view if anyone approached from the front.

I was looking down and filling out a report when I heard a whispering raspy sounding voice. I instantly looked up as I wondered what it was. I scanned left and right as I looked for someone, but there was nothing. It was just me in the dark. After a while I decided I must have imagined it and went back to work.

A little while later I heard it again. I looked around, but there was nothing.

This went on for almost two weeks. The voice was random and I could never figure out what it was saying. Other times it sounded like a noise. It was always so low I could barely hear it. I never heard it while I was driving. It was only when I was parked and sitting in the car.

As funny as it sounds, I started to wonder if my car was haunted. I have been driving the same car since 2010 and it never made sounds before. You just shouldn’t hear a strange voice when you’re sitting in the dark.

After the first week I wondered if I should tell someone about it. But how do you bring that up in a conversation? What do you say? “Hey, I’m hearing voices.” Not.

I had three days off and then it was back to work and driving my car again. I worked Wednesday night and it happened again. I started wondering if someone left a cell phone in the car, but there was nothing when I looked in the doors and under the seats. This was starting to creep me out.

The next night I was on a crash and a motor officer sat in my car to look something up on my computer.

He got out of the car and told me he heard something!!! You have no idea how good that made me feel to know it wasn’t just me. I then told him about the noises I was hearing in the car. He gave me the crazy look and said that was weird.

While I was still on the call, an officer named Mike got me on the radio and asked me if anything weird had been going on. He then told me to meet him.

This particular officer is a funny guy and I knew something was up now, so I raced over to see him. When I arrived at his location he asked me if I was hearing weird noises. I told him the story about the voices and the noises I was hearing. He started laughing so hard I knew he had done something.

He went to my car and reached underneath the police radio console and pulled out this round object that looked like a miniature speaker. He pushed something and the raspy male voice came on. OMG!

We both started laughing as I told him the stories about my haunted car. I was so relieved to know I wasn’t hearing things. His little sound maker was set to make a noise every so often at random times.

Some people might ask why I didn’t just drive another car. Well, that particular car is the one I like to drive and we’ve been through a lot together. I couldn’t just discard it because of a few strange voices.

It was a once in a life time prank that I’ll never forget. I won’t lie, I was so happy the joke was over.

2 thoughts on “I thought my patrol car was haunted”