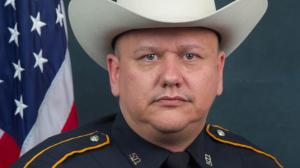 His name was Darren Goforth. He was a deputy with the Harris County Sheriff Department in Texas and he was murdered on August 28, 2015 at 8:25PM.

He wasn’t bothering anyone. He was only pumping gas into his patrol car. The news account say he was shot from behind and fell to the ground. The suspect then stood over him and shot Deputy Goforth a couple of more times.

The suspect drove away like a coward and left him to die.

Just reading this made me angry. Every law-abiding citizen should be angry at such a senseless killing of a man and a symbol of law and order. This wasn’t just an attack on a police officer. It was an attack against what we stand for as a society.

Deputy Goforth wasn’t involved in a high risk warrant service. He wasn’t on a car stop or on a domestic violence call. He was putting gas in his patrol car at a gas station. The senselessness is beyond words to me. The evil shown by the suspect is beyond comprehension.

This all happened because of the uniform and badge he was wearing. He was on-duty tonight, just like I was. He was serving his community just like thousands of other officers.

Take a moment today and reflect on what you have and think about Deputy Goforth’s family. They didn’t deserve this. No one does.

His name was Deputy Goforth and he was a police officer. His life mattered.

2 thoughts on “His name was Deputy Goforth”