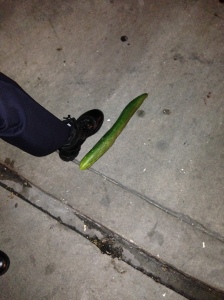 One night, dispatch broadcasted an unknown trouble call over the radio with no other details except there was a man down on the sidewalk. I was close by and responded with other officers.

When I got there, there was a male in his mid to late 50s lying on the sidewalk. There was no one else around except for him. He was disoriented and was hard to understand. He didn’t look homeless and he had clean clothes on. I didn’t get close enough to see if he was drunk.

At first, it appeared the guy might have fallen and hit his head, but we weren’t sure. It clearly wasn’t a collision since the guy was on the sidewalk and there was no evidence of a car hitting him or anything else.

Other officers and fire personnel spoke with the guy to try and find out what happened. I stood by with another officer as we watched. While we stood there, we couldn’t help but notice that there was a large cucumber on the sidewalk next to the man.

It wasn’t a gun, a knife or any other type of weapon. It was a cucumber. And I’m not talking about any old cucumber. I’m talking the longest cucumber ever seen. It was the type of cucumber that would make other vegetables jealous.

There were so many questions now. Was the cucumber the weapon that took him down or was he carrying it? Even if he was carrying it, who walks around with a cucumber at night?

Someone else handled the call so there was really wasn’t anything to do except to make jokes about the cucumber. How could we not?

Good thing it wasn’t in his pocket. That would’ve been an awkward conversation for sure. “Is that a cucumber or are you happy to see me?”

The paramedics loaded him onto a gurney and started to wheel him toward the ambulance. The cop I was talking with picked up the cucumber and put it on the gurney next to the guy. Who knows, it might’ve been his.

I bet that was the first time a cucumber went for a ride in an ambulance. I’m sure the people at the hospital were going to have the same questions about the cucumber on steroids.