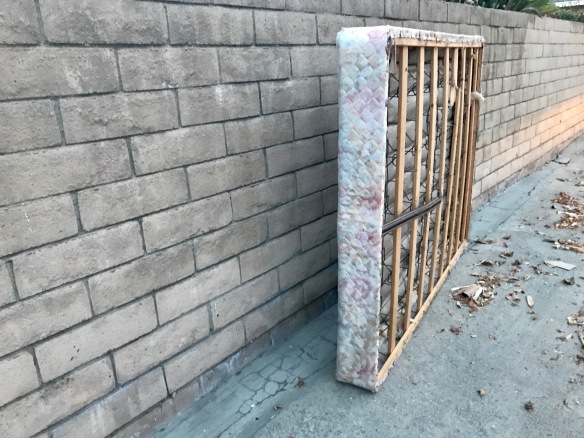 On Friday evening, there was a call holding about a person sleeping on a mattress on the side of a house. I was close by and decided to handle the call because it was holding for an hour.

A nice autumn breeze filled my car as dusk’s shadows covered the area.

I found the house I was looking for, but there was no mattress on either side. My police car caught a neighbor’s attention, so I walked over and told him the reason I was there.

The man said, “You’ll want to look in the alley. I bet that’s where they’re talking about. We have a lot of homeless walking through the alleys.”

We engaged in small talk and then said bye.

I next drove to the alley, which was more narrow than most in the city. Luckily there were no cars parked there because there wasn’t much room. At the end of the alley I saw a queen size mattress box spring leaning against the wall.

There was a woman at her trash can who spotted me and started walking toward my car. I could tell she was the one who called by the look on her face and the strength of her stride. She walked up to my passenger window and leaned down. “Hi, I’m here for the guy who was sleeping on the mattress,” I said.

The woman pointed to the box spring and said, “He was sleeping on that all day.”

“That big mattress was on the ground in the alley and he was sleeping on it?”

“Yep. I finally told him he had to leave. He got up and leaned the mattress against the wall and walked away. That mattress has been there for a long time. He’ll be back I’m sure.”

As a traffic guy, I imagined this man getting run over by a car and causing lots of paperwork for me. The alley was just over 20 feet wide and there was no room for sleepy time in this spot.

I contacted dispatch to have a city crew take the mattress away. The woman was grateful and thanked me. She asked for extra patrols through the alley and was so happy the mattress would be gone by tomorrow. I was glad I could help.

This call might not have sounded sexy or exciting, but it was a big deal to her because that box spring was an eye sore in her alley.

It’s easy to forget, but we, as cops have to remember it’s the little things that matter most to people when they call for our help.

This profession has and always be about helping people. Even if it’s with the small things.