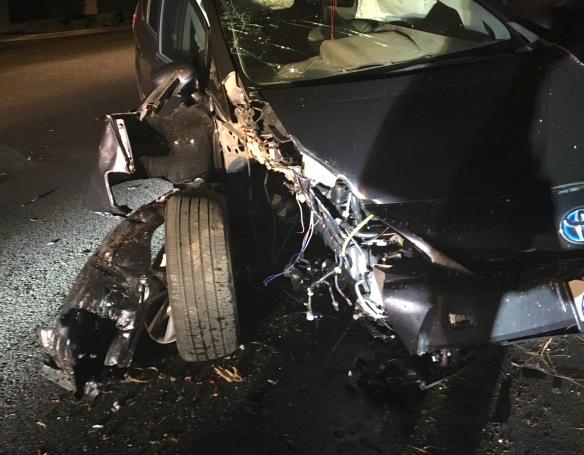 A few weeks ago I was sent to a call where a car crashed into a tree on the east end of our city. When I arrived, I saw the car in the middle of the street with major damage and fluid running downhill.

There was a pine tree on the side of the road with a large battle scar from the impact. The tree stood upright and strong as if to say, “Is that all you got?”

The officers on scene told me the driver crashed because of an animal.  I had heard that one before. Which animal was going to be blamed tonight? I was guessing a dog or a cat.

I couldn’t resist as I asked, “Was it a squirrel?”

The woman gave me a confused look as she shook her head. She said, “I think it was a coyote. I have a picture.” She reached into her purse and pulled out her phone. She looked at her phone for a few seconds and then showed me a picture of a coyote in her backyard.

“Is that the coyote that ran in front of your car?” I asked.

“No!” She replied with a hard shake of the head.

“Which way was the animal running? Was it going that way or that way?” As I pointed to each side of the road.

“It was in the middle of the street.”

“Was it a squirrel?”

“No,” she said again with a strange look.

“I closed my eyes and the airbag went off.”

“Are you sure it wasn’t a squirrel?”

“Why do you keep asking if it was a squirrel?”

“Because its funny,” I replied with a big smile.

She heard that and burst out laughing. I was glad she laughed because I wasn’t sure how she was going to take my joke.

There’s one thing for sure about police work. Sometimes you just have to have fun out here.

8 thoughts on “What kind of animal was it?”