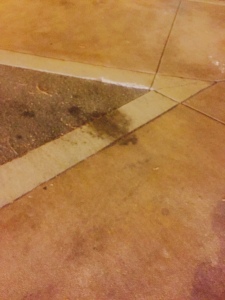 As cop, it seems like every street corner has a story. After a while, some street corners have more than one story. Driving around on patrol is like watching a highlights movie of your career as you pass spots that remind you of old stories.

Not too long ago I responded to an injury traffic collision where the vehicles were on fire. The heat was intense as I watched the fire consume the vehicles like they were wood at a campfire.

As I walked up, I saw a lifeless body in the street in a pool of blood not far from the burning vehicles. The person was picked up and put on a gurney. As the person was wheeled to the ambulance, I took a quick peek and knew it didn’t look good. The person died a short time later at the hospital.

Hours later; the scene was cleared and the vehicles were towed away. The streets were opened back up and traffic resumed. People went on with their lives as if nothing happened.

Now, fast forward a week later when I was dispatched to another injury collision at the same location. When I arrived,  I saw one of the vehicles stopped in the street a few feet away from where the fire had been.

I contacted one of the drivers at the southeast corner and interviewed her. While she told me what happened,  I glanced around because we were only a few feet away from where the body was last week. That’s when I saw a blood stain at the crosswalk. The stain and burn marks in the street were reminders of the chaos from the week before.

It turned out both collisions involved cars making left turns and were almost identical to each other. I found it a little eerie to be standing in the same spot under similar circumstances so soon afterward. If the people from the crash only knew what happened here the week before.

As the tow truck cleaned up,  I looked over at the blood stain and wondered how many more stories I will have at this corner before I retire. Unfortunately I’m sure there will plenty.

2 thoughts on “Every corner has a story”