Last year on Halloween night of 2014, a new radio code was born that no one new about. It’s not an official radio code, but it’s the source of a great inside joke that will go on for years.

On that night a 901T involving a pedestrian went out in the southern part of the city and two patrol officers were dispatched to it. My partner and I were on a different call at the time in the east end of our city. It was raining cats and dogs so we had to seek shelter under the porch of someone’s house just to get away from the craziness. At that point I needed a towel more than an umbrella.

We were standing there feeling miserable when an officer got on the radio and said, “This is a 901 Frank.” 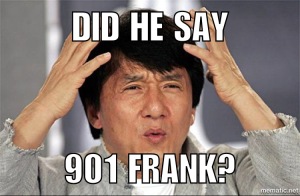 What the heck was a 901 Frank? None of us had ever heard that before. The dispatcher said something on the radio and then the officer spoke again.

“It’s a major and start a traffic.”

“Traffic is 10-6,” replied the dispatcher, advising him we were busy.

“Confirming you conveyed the message to traffic that this is a major.” The tone in his voice told us this was more than just a regular crash.

After hearing the word “major” it was time for us to drop what we were doing and head to that call. We had a long drive and I knew we were going to have some good natured fun with the officer who said 901 Frank when we got there. How could we pass it up?

When I pulled up to the call, I went up to the cop and we started having fun with him. “What’s a 901Frank?” I asked.

The officer said, “It was bad. There was blood coming out of his eyes.”

He was an experienced officer and a great guy, so if he said it was bad then it was really bad. He meant 901 Frank (901F) to be fatal or possible fatal collision. Either way, you’ll never find it in any radio code list ever.

In the end we finished the call and the pedestrian survived. From that point on the term 901 Frank achieved legendary status among some of us who worked that night. It’s one of the funniest inside jokes around and was the subject of numerous memes that I may or may not have created.

Thanks MW for the laugh. It’s still a great story and it’s hard to believe it happened a year ago.

1 thought on “An inside joke that lives on”