Anyone who has ever worked this job knows you joke around a lot. Some call it a defense mechanism to all of the things you see and hear at work. That being said, there are certain things that I find funny that the regular person wouldn’t. It’s not that I’m uncaring. It’s just part of this job.

I’ve always joked saying the Heisman Trophy looks like a pedestrian right before a collision occurs.  Since I can’t put the Heisman in the drawing I have to use a Stick Figure Guy.

When the drawing was done, I looked at the computer screen and I wondered what the stick figure guy would look like with his hands down. But in reality, what pedestrian has their hands down when a car is about to hit them.

The hands in the up position as the pedestrian says, “Oh shit” was more believable to me.

Then I thought about turning in the report with the hands in a different position, like one up and one down. I clicked on the hands and it reminded me of John Travolta in the movie Saturday Night Fever. A Bee Gees song from the movie flashed in my head as my stick figure guy’s arms assumed the disco position. 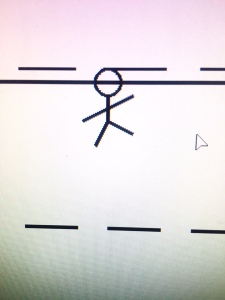 Of course, this was funny to me for no other reason that just because. I guess some things are funnier at 2AM.

After that I wondered what other ways I could draw the stick figure guy in my report. That’s when I came up with the last stick man with his legs and arms bent in different positions. 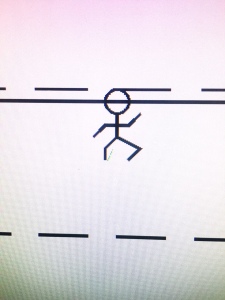 I actually laughed when I saw it. That stick figure guy was probably closer to what we see at collisions when people look like human pretzels. Maybe after almost 6,000 crashes I’ve become a little twisted. Like I said, I find humor in stuff the regular person wouldn’t.

Be safe out there and don’t become the stick figure guy in a drawing. Watch for cars when you cross the street.

9 thoughts on “The Stick Figure Guy”