You never know what’s going to come out of someone’s mouth when they’re worried about getting a ticket. The stuff people blurt out might’ve sounded good in their head, but not so much when a follow up question is asked about their excuse.

The other day I stopped a car for making a right turn on a red light without stopping. After the car stopped, I walked up on the driver door and asked, “Hi, how come you didn’t stop for the red light when you turned?”

The driver, who was in his mid-thirties, unshaven and wearing a buttoned up work shirt nervously said, “I’m in a hurry to study for a test.”

I raised my left arm up in an exaggerated manner as I looked at my watch, which said 6:15PM. I looked back at the driver and asked, “Is your test at 7 o’clock?”

“Studying for a test that’s two months away is the best you can come up with?” I asked as The Price is Right’s loser tone went off in my head.

At least he smiled at how silly his excuse sounded.  I guess it was worth a try, but he should’ve studied the part about stopping for red lights in the DMV handbook instead. 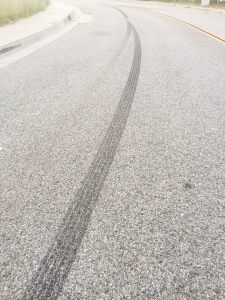 Actual skids from the Dodge.

Today I was minding my own business as I sat at a red light. The sun had just dipped below the horizon as dusk descended on the area. My windows were down and the late summer breeze felt good.

When the light turned green, I coasted into the intersection with no particular place to go. I was just going to cruise around and enjoy a drive through the city. That’s when a large cloud of smoke caught my eye off to my right on a street that paralleled the one I was on.

The cloud was getting larger by the second as it surrounded a red Dodge Charger. The burn out seemed to last forever and was actually kind of impressive to watch.

I made a right turn on the side street to go talk to the driver about his lack of common sense. As soon as the driver saw me his tires quit spinning, but the cloud of burned rubber floated with the afternoon breeze toward my car.

After I stopped the car I walked up and asked the driver, “Were you having some type of medical problem that made your foot press down on the gas pedal like that?”

“I was being stupid,” the driver said as he put his head down on his steering wheel.

His license showed an address that was far away from where we were, so I asked him how he ended up on this particular street. The driver replied he was going to a local club around the corner and he wanted to test out his new car. He told me he picked this street because no one was around.

I was amazed by his honesty. I also appreciated how he picked a street with no cars, businesses or homes to practice his speed skills on. I told the driver, “You did a dumb thing, but you were smart about it. I appreciate that.”

He gave me half a smile and didn’t say anything.

“What did you say when you saw me?” I asked.

“I would’ve said the same thing. Did you know you’re going to be my next blog story?”

“I do and this story is too good to pass up.”

A records check showed that the driver was very experienced in the traffic ticket world. I walked back to him and asked, “How many tickets have you had?”

“Well, today you’re only getting a ticket for not having the insurance paper in the car. Is that better than another mover?”

The driver let out of huge sigh of relief as his entire body relaxed. He stuck out his right hand and offered to shake mine. I shook his hand and told him I hope he understood what a huge break I was giving him.

After he signed the ticket I said, “Out of all the cops you’ve ever spoken to, was I the best?”

I gave him his copy and offered my left fist as I said, “Give me knuckles.”

He fist bumped me with a smile and I walked away wondering why every person couldn’t be like that guy. Life would be so much easier if they were.

Last night I saw a tow truck run a stop sign right in front of me while going at least 20 miles per hour. I followed it to the next stop sign because I wanted to see if the driver was going to do it again. Of course, the driver rolled through that stop sign also, but not as bad as the first one.

I stopped the tow truck and walked up to the driver side. The driver had a weird look on his face as he opened the door so we could talk.

He handed me his license as I asked, “Why didn’t you stop for the stop sign?”

“I have to go to the bathroom,” he said.

“You do?” I said with a raised eyebrow. I’ve heard this excuse before and I wasn’t buying it.

“Where are you going to use the bathroom at?” I asked.

Maybe he had to use the restroom, but I wasn’t sure if it was as bad as he was making it out to be. I decided to write him a ticket because he hadn’t tried to stop for either stop sign.

I started to walk away, but then turned around as I asked, “Number 1 or number 2?”

“It’s going to be number 3,” he said with a serious look.

I wrote the ticket a little faster just in case……