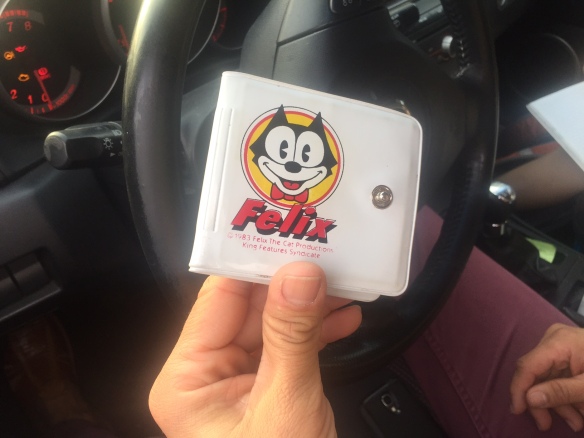 On Friday afternoon I saw a guy stopped across the intersection for a red light. When the light turned green, the cars next to him went, but he didn’t.

The intersection wasn’t that big, so I was able to see him looking down. There was also a line of cars behind him that couldn’t go because he was still stopped. He finally looked up and started to go. As he drove through the intersection he passed within a few feet of me. It was still daylight and I could see him holding his phone as he looked at it.

He wasn’t paying attention to anything around him, including the police car. I made a U-turn and stopped him.

When I walked up to the car I asked, “Where’s your phone?” He reached under the seat and pulled it out. That was funny because he took a while to pull over. I guess shoving the phone under the seat was the best idea he had at the moment.

I next asked him for his license and told him why I stopped him. He admitted to being the phone, which was refreshing.  It was actually nice to hear someone tell the truth and I appreciated it.

The driver reached into his back pocket and pulled out a white plastic looking wallet. From where I was standing it looked like the type of wallet my daughter had when she was 5 years old.

I watched his hands as he opened it up. There was something odd about the way he maneuvered his hands. It was like he didn’t want me to see something.

After he handed me his license I pointed to the wallet and said, “Turn that over.” The driver looked up with pleading eyes like he didn’t want to. He then slowly turned it over and revealed a picture of Felix the Cat.

“Felix the Cat?” I asked. He didn’t say anything. He only sat there with an embarrassed look on his face. Maybe it was because he was 30 years old.

I pulled my phone out of my pocket as I said, “I have to take a picture of that.”

He squinted his eyes as he asked, “You’re going to take a picture of it?”

I already knew this was going to make the blog because I had never seen an adult with a kid’s wallet on a car stop. “Sure, why not?” I said. “Plus, I’m not going to give you a ticket if I take the picture..” He realized how good an idea the picture was and held it up.

I’m sure he’ll remember me the next he wants to text and drive. Maybe he’ll keep his eyes on the road instead.

7 thoughts on “Let me see your wallet”