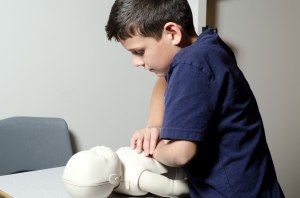 You never know who you’re going to run into on this job.

On Saturday night, I got to work and headed straight to Starbucks to type reports and to get my daily drink. I walked in and headed to my usual table. I glanced over to the right and saw a man and a woman sitting at separate tables. Both were facing the door and looked up at the same time. I made eye contact with both and said hi as I dropped my computer off at the table.

After I got my drink, I walked back to my table and I noticed the woman looking at me. I nodded at her and sat down. About a minute later, the woman got up and stopped at my table. I looked up at her and said hello. She said, “You were the first responder that came to my mom’s house.”

“Which call?” I asked because I didn’t recognize her.

I instantly knew who she was talking about. Her mother was my third attempt at CPR in less than a year.

She smiled and said, “I just wanted to say thank you.”

The words “You did CPR on my mom” instantly triggered the memory from that night. In fast forward motion, I remembered the call coming out over the radio about a woman who wasn’t breathing. I was there within a minute and arrived before the paramedics.

The family was upstairs when I entered the house. The sound of my boots jogging up the wood stairs told them that I was coming to help. I then saw a man bent over a hospital bed doing chest compressions on his wife. I went around to the other side and took over, hoping the paramedics would get there soon.

Then there was her mother’s lifeless face two feet away from mine as I started chest compressions. Of course, the two other CPR attempts went through my mind for the next two minutes before the paramedics arrived. She was pronounced dead a minute later.

I was in the hallway when the man made a phone call. The first words into the phone were, “Mom’s dead.”

All of this flashed through my head as I shook her hand and said thank you for stopping to talk with me.

“How long ago was that?”

She stood there and told me some stories about her parents and her mother’s illness. After a few minutes I pointed to the chair across from me and said, “Do you want to sit down?”

She smiled and took a seat. She told me about a trip she recently took and how she was her mother’s caregiver for years. She thanked me a few more times and finally went back to her seat.

A few minutes later I was dispatched to a call. I gathered my things and walked over to her table to say goodbye. Even though her mother died, she appreciated that I had tried to help. Her thank you went a long way that night and meant a lot.

Police work isn’t always about catching the bad guy and car chases. It’s about the people we meet and emotionally touch throughout our careers. That’s where the real satisfaction of the job comes.

2 thoughts on “The thank you that meant a lot”