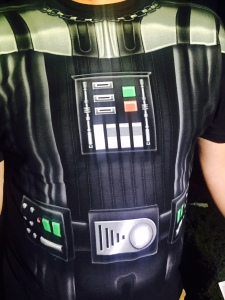 Last night I went to a call in which two parked cars were hit. When I arrived, I saw a man standing there with a Darth Vader t-shirt on. His wife’s shirt had a Storm Trooper shooting a blaster with a laser coming out of it with the words “Pew Pew.” It’s not every day you get to meet a Star Wars couple at a crash.

The driver, who we will call Frank, told me he was tired and spent the entire day at Disneyland. His wife was driving in front of him at the time in another vehicle with their kids. He dozed off and never saw the parked cars before the crash. His wife didn’t know about the collision until he called her with the bad news.

His wife was both upset and hilarious at the same time. She couldn’t believe he had crashed into the parked cars. Their car suffered major damage and she said, “I’m getting the new car. He can have mine.”  At one point Frank was banished to the other vehicle as she said, “Go wait over there.”

We talked with her as we waited for the tow truck. Of course, the subject of Star Wars came up and we learned she was a huge fan. We also found out Frank didn’t become a Star Wars fan until he met his wife. From that point on, he was young Jedi in training. 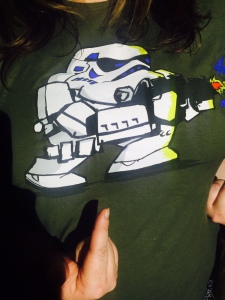 As the tow truck picked up the car, it got closer for Frank to meet his fate on the drive home with his Master Jedi.  When it was time to leave, Frank walked up to us and said goodbye as he held out his hand. Something told me he was going to need Yoda, Luke Skywalker and Obi-Wan Kenobi on his side at the same time. I shook his hand as I said, “May the force be with you.” He laughed after hearing that.

That’s when his wife said, “When he gets home I’m going to Pew Pew him.” That just made us laugh even more because of the shirt she was wearing. After all these years, I never thought I would hear the words “Pew Pew” at a collision scene.

In the end I asked if I could take pictures of their shirts. They proudly posed for the photos and shook our hands when they left.

That’s when one of the officers said, “Why can’t they all be like that?” I totally agreed. It always makes the job easier and fun when you run into super nice people.

Frank, I hope the “Pew Pew” wasn’t that bad when you got home.

2 thoughts on “The Star Wars couple”