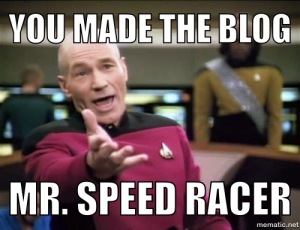 Sometimes I’ll be on a call and another officer will ask me if the story is going to make the blog. It’s funny to me because I’m usually thinking the same thing.

The other night I was on a stop and I said to myself, “This has blog written all over it.” I was even tempted to tell the driver he was going to make the blog because of his stupidity. I also wanted to tell him he was one of the reasons why I have new stories every night.

Let me back up so I can explain how I met Mr. Speed Racer with no brain.

I was stopped at a red light thinking about all the reports I had to write because of the collision epidemic that my city sometimes suffers from. That’s when I heard the sound of skidding tires and an engine revving. A few seconds later I saw a car approaching from the opposite direction, which was clearly the winner of a race. The loser was in the next lane bringing up the rear.

I stopped him and asked, “Why do you think I stopped you?”

“You think I was racing,” replied Mr. Speed Racer.

“What would make you think that?”

It was clear to me that this 24 year old didn’t see the big picture in life. It made me wonder how I could provide world class customer service to this individual so he would see the error of his ways.

I did some research on his stops and I saw my name attached to one of them from May of 2007. It turned out I stopped him and impounded his car for driving while unlicensed eight years ago. What are the odds of that?

I went back up the Mr. Speed Racer and asked him how many times his car had been impounded. He said, “A lot.”

“I impounded your car too.”

After I was done with the stop, I knew Mr. Speed Racer was going to be immortalized in a Badge415 blog story. He’s a perfect example of people who make poor decisions and wonder why the police are talking to them.

I’m pretty sure Mr. Speed Racer will lose his license again after my stop. And I’m really sure he’ll get his car impounded again too.

Who knows, maybe I’ll be the one who stops him again and we’ll have Mr. Speed Racer 2.0 blog story. I’m confident he’ll never learn his lesson until he hurts himself or someone else.

Until then, be on the lookout for Mr. Speed Racer and other people like him. Unfortunately they don’t care and never learn their lesson.