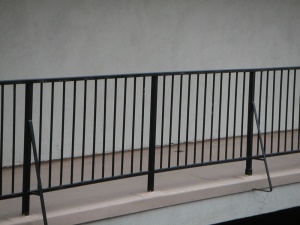 Another officer at work gave me permission to share one of his stories. He would also like to remain anonymous, so I’ll call him Jim.

One night, Jim was dispatched to a family disturbance call in which a son had threatened his mother with a knife. The location they responded to was on the fourth floor of an apartment complex. The complex had a courtyard and the apartment doors faced toward the center. Each floor had a metal railing about five feet from the apartment front doors.

When the officers arrived, they climbed up the stairs to the apartment and saw the front door open. Jim went up to the door and peered in. He saw the suspect standing in the hallway with something in his hand. As Jim looked more closely, he saw that one of the suspect’s hands was wrapped in bloody towel. Jim tried to see if the suspect had the knife on him, but didn’t see it.

With a blank look of a zombie, the suspect turned toward the front door where Jim was. The suspect continued to stare blankly in that direction when he saw the officers. With a crazy and determined look, the suspect started running in a full sprint toward the door. Without hesitation, the man exited the apartment toward the railing and dove over the side. Jim tried to grab the man, but he was not able to.

Jim noticed that the man did not fall the way they do in the movies with their arms flailing about in the air. As the suspect went over the railing, he turned around and locked eyes with Jim. They then stared at each other as the body fell toward the unforgiving concrete below. Their eyes stayed on each other until the suspect’s body crash onto the pavement with a sound that Jim will never forget.

Immediately after the call was over, Jim started to wonder if he had done everything he could as he played the scene back over and over in his head. He replayed every detail with self doubt now. To make matters worse, the mother made an allegation that the officers had thrown her son over the railing. This added more stress to the situation because he had to deal with an internal affairs investigation also. Luckily the officers had been carrying recorders on them at the time and they were cleared.

I asked Jim if there had been anyone to talk to about this traumatic event. His department offered to bring a counselor in, but he shrugged it off and said he was fine. But in reality he wasn’t. He replayed the scene over and over in his head with the graphic images of the suspect locking eyes with him as he fell. The sound of the body crashing into the pavement also stayed with him. It’s a sound he will never forget. That ghostly image would have haunted anyone.

Jim’s father was a police officer at the time and his mother was a dispatcher. They both understood about the job and he was able to speak candidly with them about what had happened. He wasn’t comfortable speaking with the counselor, but he found comfort from his parents, who knew the job and what comes with it. He was able to confide in them and they were there for support.

There were two things his father told Jim that made him feel better and helped him deal with how he felt. His father told him that the suspect had planned on dying that night no matter what. It was as simple as that. That guy wanted to die and there was nothing anybody could do about it. The other thing was the suspect wanted to die alone. If he really wanted to, the suspect could’ve run into an officer like a linebacker going after a running back. He could’ve wrapped his arms around one of them and taken them over the edge with him.

I hadn’t thought about that when I first heard the story, but I agree. Jim told me he hadn’t thought about it either until his father mentioned it. This made it easier for Jim to deal with it, because it was clear there was nothing they could’ve done differently. About a week later, the other officer on the call approached Jim and said, ‘I’m having problems with this.’ Jim related what his father had told him and he’s pretty sure this helped the other officer out.

This was a good example of peer support on the job. In this incident, the person he trusted just happened to be a cop, who was also his father. That worked best for him.